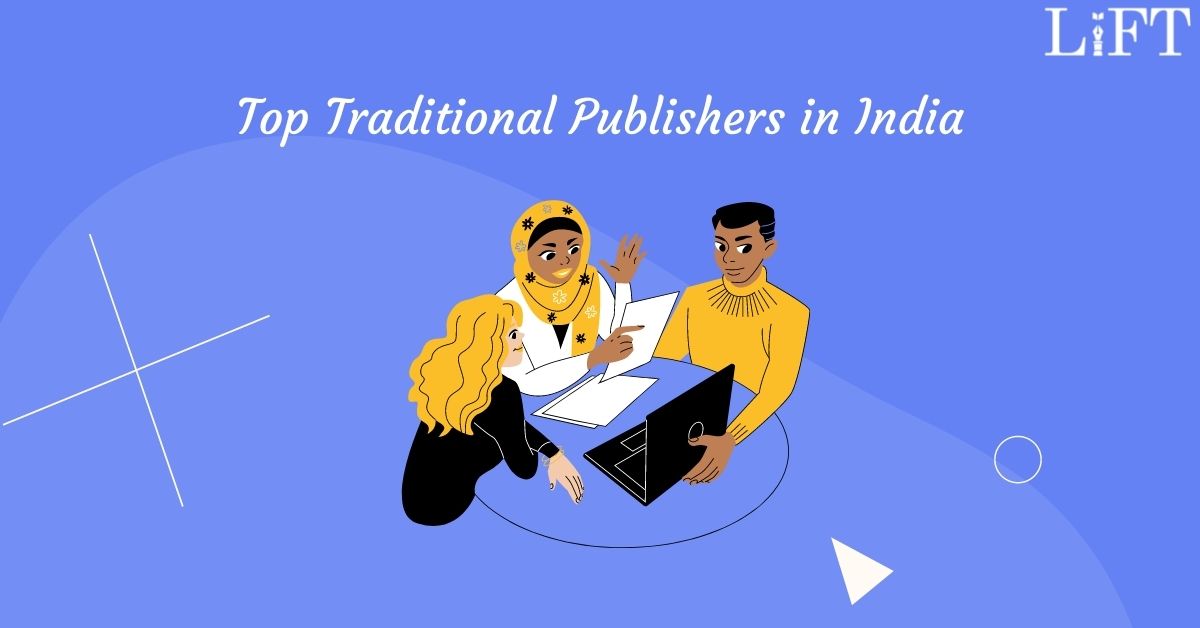 Why people prefer traditional publishing is that they wish to be called as an author of so or so publishing house that might have ample number of bestselling authors onboard. But to be published through these renowned publishing houses, your script should be unique, appealing, error free and presentable.

Overall, there are two ways to approach a Traditional Publisher with your book: 1. Direct Submission, and 2. Pitching your script through a literary agent.

To move forward, we would like to give you a complete list of Traditional Publishers that are currently active in India.

Rupa Publications: Rupa is one of the biggest traditional publishing companies in India. Recently they have started accepting unsolicited content from writers. This opens a plethora of possibilities for young authors to get a big brand backing. Rupa has traditionally published some of the most loved Indian books of all time.

Jaico Book: Jaico Publishing House needs no introduction. They are the publishers of some famous authors like Robin Sharma, Osho, The Dalai Lama, Sri Sri Ravi Shankar and many more. The founder, Mr. Jaman Shah established this company in 1956 and it has been ever-growing since then. It is the first publishing company in India to deliver content in English.

Hachette India: This is an Indian off-shoot of Hachette U.K and it was started in the year 2008. Its first book ‘My Friend Sancho’ by Amit Verma was a best seller. They give a great deal of encouragement to the new authors. They have dozens of imprints and they publish all kinds of fiction, self-help, children’s book, travel titles, history, and others. The catch is, they only accept submissions through literary agents, and they provide an exhaustive list of agents that you can choose from.

Aleph Book Company: Aleph is an independent publishing house by Rupa Publications. It was founded by David Davider, the former president of Penguin Books Canada. Being a novelist, he went into collaboration with R.K Mehra and Kapish Mehra of Rupa Publications in 2011. This Indian publishing house has its head office in New Delhi. They publish non-fiction and fiction books of South Asian writers. Their list of authors is enviable like Ruskin Bond, Romila Thapar, Shashi Tharoor, Khushwant Singh and so on. They do not accept unsolicited manuscripts.

Bloomsbury Publishing: Bloomsbury is a traditional Novel publishing house that has global presence. Over the years Bloomsbury has published some great fiction and non-fiction novels. This multinational publishing house was established in India in 2012. They accept fiction and non-fiction manuscripts in almost all genres like Mythology, Historical, Travel, Young Adult Fiction, Management, Philosophy, Memoirs, Romance, and so on.

BlackInk: Founded by the bestselling author Ravinder Singh, Black Ink accepts amazing stories from the Debuts who are looking to kick start their career in writing. It is a dream come true publishing house for many aspiring authors who love reading books from the King of Romance, Ravinder Singh.

Srishti Publishing: Srishti Publishing started its operations almost two decades back. They are always keen to offer a fair chance to the new writers. Publishing almost 350 titles per year, they have grown multifold. They publish books in various regional languages along with English and Hindi in various categories like fiction, thriller, philosophy, self-help, and so on.

Leadstart Publishing: They are one of the leading publishing house with the largest book distribution system in the country. They accept submissions in all major categories. Several of their authors have been award-winning authors.

Remember one thing while submitting your manuscript to the traditional publishers. Their Turn-Around-Time (Also known as TAT in the literary lingo) can be in months, while for some it can be in weeks. It is important to be patient and wait to hear from them.

More often than not, if you receive a no reply, it can be considered as a rejection. Tagging them on social media platforms or contacting their key personnel online through DMs and other mediums are not advisable.

Once you hear from them in a negative, please do not write back to them with loads of questions. If you have received rejections, do not take them personally. Remember, the publishing houses work as per the market requirements. A rejection does not mean your manuscript is bad, it simply means that it doesn’t fit the requirement of the targeted publishing house.