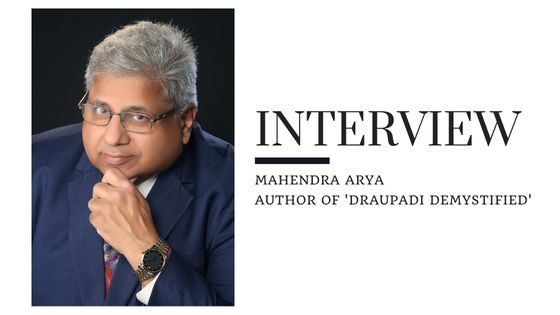 Mahendra Arya is an engineer by education. Writing has been his passion in Hindi as well as English. He is a multi-faceted person, who writes fictions, thrillers, mythology, plays and poetry. His plays have been staged in Mumbai and he has played a character in each of his plays. His earlier published books include thrillers like Facebook Friends and Tangents and a Circle; however, his mythological fiction Kaikayi – the Misunderstood Queen has been extremely popular among his readers. His Facebook Friends has won the Best Plot Of The Year 2022 award by the renowned publisher Ukiyoto; the book is being considered for making a film by an established TV channel.
The Lockdown due to Corona inspired him to take up writing as a regular hobby. During lockdown he scripted three books. His latest work is about Draupadi, one of the central characters of Mahabharat. As per Mahendra, Draupadi has been portrayed as a woman who had five husbands. By any yardstick in India, this is an unacceptable position. Surprisingly such a blatant lie has been justified with imaginary reasons and stories. He has written this book presenting Mahabharat from Draupadi’s point of view. He has relied upon available research papers.

Mahendra Arya: Mahabharat is one of the oldest epics of India written in Sanskrit language. It is considered as the longest ever written poetry too. One major issue is the ever-expanding length of the epic. As per historians the original epic was written by Maharshi Ved Vyas; which contained 4400 Sanskrit Shlokas (Sanskrit Couplets). The disciples of Vyas added further about 5600 shlokas to the original; thus, the epic became a huge compilation of 10000 shlokas. The present form of Mahabharat contains 125000 shlokas. Thus, the original Mahabharat of Vyas has become thicker by more than thirty times of the original. The truth has become like salt in the food.
Such huge addition has corrupted the original content of the epic. The original true story has changed its form. Lots of hypothetical references have been inserted. One of the biggest sufferers in this process is Queen Draupadi. Her image has been tarnished by assigning arbitrary narratives to her character. The biggest of those is that she was married to Five Pandavas. She has been tried to be looked like an exceptional person by assigning her birth directly from fire. A forecast got added that she would be the cause of destruction on earth. Many more of such impossible tales! Miracles were weaved around her; like when Duhshashan tried to disrobe her in the court of Duryodhan, Krishn saved her by magically increasing her saree to unending limits.
Why should one believe the impossible tales, which are not possible? Such falsehood is generally created by making the person Godly or by creating false history of previous birth. Who has visited previous birth of anyone? Of for that matter his own? Very smartly the couplets in Sanskrit have been created and inserted in the original epic. Masses are not educated in Sanskrit to find our any such contamination. The learned scholars of Sanskrit have done lot of research work and have tried to separate the additional slokas from the original. Writer has tried to follow such work of research.
Writer has tried to remove the falsehood from the real history. The narrative has neem presented from the point of view of Draupadi. Writer has taken liberty in the dramatization at places but without changing the factual parts minus the falsehood.

Mahendra Arya: Draupadi Demystified is the perfect title for this book; as I have tried to remove the falsehood which is attached to the life of Queen Draupadi in Mahabharat, Demystification is based on logic and research.

Mahendra Arya: I have always been writing stories, plays and poetry in Hindi. My six plays have been staged in Mumbai and the same had been very much appreciated. The lockdown provided long free hours, I decided to focus on writing books. I love to write mysteries and thriller besides my research based mythological fictions. During last two years I have published five books. My inspiration has always been my father, who was always writing articles and books on spiritual and philosophical subjects.

Mahendra Arya: I want to focus more on writing as I grow older. Presently I am running my business as my main activity. But gradually I wish to reduce my working in business and focus on my literary activities. I wish to have at least 30 books as my work in next ten years.

Mahendra Arya: A book has to be likeable at the first sight for a reader. The cover and overall presentation attract a reader, which is a natural phenomenon. In today’s world we cannot depend upon book sales through stalls; the present time is the time of electronic media. Proper marketing strategy is needed in order to reach out to masses.

Mahendra Arya: Books will always stay for people, in spite of all other medium. Books can connect minds through a solid written communication. Everyone should always compete with oneself as his writing should evolve regularly.

Mahendra Arya: I write poetry. I write poetry based on the hymns of Vedas also. I have a knack for composing music; so, I also compose the tunes of my songs. I have recorded few musical albums. I spend time on social media also.

Mahendra Arya: As writing is not my continuous work, I never feel any kind of block. Ideas keep on coming in the mind; ideas need to be stored for future writing.

Mahendra Arya: India has many great directors and actors. It is difficult to narrow down few names. Sujoy Ghosh, Rituparno Ghosh and Nishikant Kamat. Unfortunately, we lost Nishikant in 2020.

Mahendra Arya: I am working on my next book; the subject is the First major scam on Independent India.

Mahendra Arya: Every budding writer should spend more time in creating something new. It is easy to write run of the mill scripts; it is required that the book should stand as a unique book.