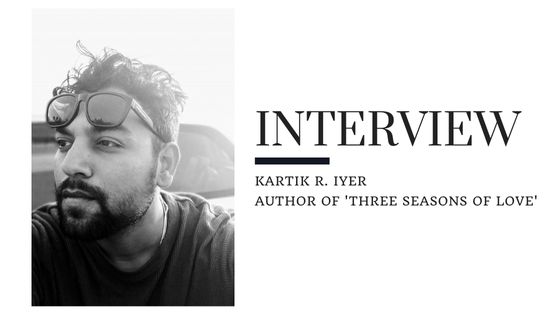 Kartik is a writer – filmmaker who predominantly works in the Hindi and the Tamil film industry. Some of his notable works include Wazir, Dobaara, SOLO, FLIP, and Taish. An advertising graduate with a master’s degree in Applied Marketing, Kartik quit his advertising job in 2012 to get into filmmaking and writing full-time. Three Seasons of Love is a collection of couplets extracted from his poems and his Instagram feed that he has been writing for over a decade under the handle @fitooriya. It is largely inspired by life and experiences.

Kartik: Three Season’s of Love is a collection of micro poems curated from my personal collection of snippets, poems and free verses that I’ve been writing for the past decade. When I bounced this idea of putting together this in the form of a book, my family and friends were equally kicked about it. The idea was to summarise and slot it in to phases so that it could make up for a relatable read. The book is divided in to the three universal phases of any relationship i.e. Pursuance, Courtship and Longing.

Kartik: The theme and the nature of the book, chose the title itself. It was only apt that I named it, Three Seasons of Love that covers the three phases of a relationship.

LiFT: When did you realize that you want to be a poet and what’s your inspiration behind it?

Kartik: Primarily, I’m a screenwriter, prior to that was a copywriter for about 3 years in advertising. Poems and free verses were largely an extension of my thoughts. When i revisited most of my poems, snippets and scribbles I felt it did have the potential to be put together as a collection. Have to mention my publishers, Notionpress were the strongest support system who believed in this idea and backed me all along and bought this home.

Kartik: I would love to put out more of my thoughts and works, not only in the form of poems and free verses but also fiction. Having said that, I wouldn’t want to come up with something just because my first book was received decently; Until I truly believe in something, I wouldn’t want to invest the time and energy in to making it a reality.

Kartik: A lot. Honestly, you could write the best piece of literature or a verse of the century but its totally useless if you do not have the necessary tools to help it finds its audience. The marketing mediums that form a bridge between the reader and the book play a very important role in the success or failure of a book.

Kartik: Believe! It has immense strength.
Do not Judge! It is the most draining exercise your mind could do.

Kartik: I’m primarily a Screenwriter and a Producer working towards becoming a Director pre dominantly in Hindi and Tamil Films and in the digital space.

Kartik: It does happen at times that you do hit a roadblock. I tend to go back to the roots of the idea or the scratch from where the particular draft begun. It does help me to have a broader perspective of the things and reminds me of the very reason I got excited about that particular idea or a thought.

Kartik: Too early to talk about it. It’s just a germ as of now.

Kartik: This is something that I face as well; The starting trouble! The blinking cursor on a blank page always intimidates me. I think writers in general have this issue or rather a conflict of interest about how a particular piece of writing should start. All I can say is, one can always come back and fix the beginning. When you start you should just follow the organic train of throught that leads you on to a particular idea or a direction.

Click here to order Radhika’s Book – Everything In A Smile