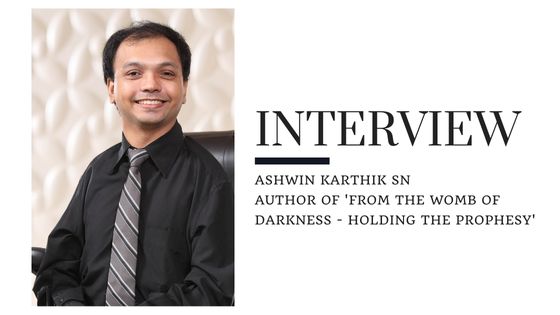 Ashwin Karthik established himself as a true achiever from the very moment of his birth. He was born with a deficient supply of oxygen, which resulted in a crippling and life-long condition called cerebral palsy. He is a quadriplegic, with the severest form of cerebral palsy that affects all four limbs. But, as though to balance his misfortune, he is blessed with an indomitable spirit and the will to take on an almost impossible challenge of leading and succeeding in a world full of people without disadvantages.
From his schools days, Ashwin’s record reflects what he has been striving to do earnestly. In 1999, Ashwin scored 84% in his SSLC exams; the highest percentage ever scored by a student with cerebral palsy. In 2003, he received the National Scholarship for his engineering studies, given to just one physically challenged student across the entire country. He is the first quadriplegic cerebral palsy student in India to have become an engineering graduate.
Ashwin worked with Mphasis for 7.5 years and then served ANZ almost 4 years as a business analyst.
Currently is working in the capacity of an Advisor to project Management at DellEMC.
His choice of three heroes in life reflects his multi-faceted personality: his mother, who nurtured him and brought him up, harnessing her enormous will power, dedication and infinite love for her son. The second hero is Sachin Tendulkar, who Ashwin thinks has made a billion people happy, and has made each one of us feel proud to be an Indian. He hopes to emulate “at least a fraction of what Sachin has done for the spirit of his countrymen”. His third hero is the celebrated British theoretical physicist Stephen Hawking, who, though crippled by a neuro-degenerative disease, has made original contributions in the field of cosmology and quantum gravity.
We can see that Ashwin’s heroes are a well thought-out selection, reflective of his deep and rich
perspective and his own aspirations: they traverse from a local and intensely emotional plane—though a sporting hero and an inspiring national icon—to an international and highly intellectual plane. Only a poet would have a mind-map like this!
Ashwin is indeed a poet. He writes poetry in English, Kannada and Hindi.
Below are the awards with he has been recognized with:
1. Awarded with the young Achiever award by Rotary Midtown and Brigade group in the year 2009.
2. Veer Savarkar award in the year 2009.
3. Determination Icon of the year by Yuva Bengaluru award in the year 2010.
4. Best Physically Challenged individual in India by National trus in the year 2010.(national award)
5. Helen Keller award 2011. (National Award) for being the Role model.
6. Positive Health award in the year 201by Dr Bathra’s.
7. Best Employee Award given by the government of India and presented by President of India in
the year 2013.
8. 2014 – Bangalore Youth Icon
9. 2015 – Karamveer Puraskar High Achiever Award (Delhi)
10. 2016 – Keynote speaker at Amazing Indians Times Now Group event (Delhi), where Prime
Minister Narendra Modi was chief guest
11. Co-author of the book “The Relic the eternal search”
12. Lyicist for the Kannada movie “Traya”(2019).
13. Nipman Foundation & Microsoft Equal Opportunity Award 2019.
14. Asian Litfest 2022- Best fiction work

Ashwin: A city grooving to its own tune and a stinking rich hotelier, Shivam Acharya ready to celebrate the baby shower of his pregnant wife at the hermitage of the seer he thought as his savior. Though it seemed the billionaire was celebrating the childbirth, but deep within he wasn’t happy. He feared the hermit’s prophesy come true. As the stage was set for big celebrations, the lady of the moment Seema wasn’t to be seen anywhere.
Butterflies began to flutter in Shivam’s stomach when he went looking for his wife. But could not find her in any of the places she visited often. What perturbed him most was that Seema was a very obedient wife. She was someone who would follow Shivam even if he went to hell, as a loving wife. The situation became more murkier when he received a very strange text on his phone. A dark poem! Not wanting to take any chance with the safety of the woman carrying his baby in her womb.
Shivam went to the authorities only to find out that his beloved wife and most trusted employee the driver were found dead! A billionaire’s wife getting killed had to anyway put the authorities to work. But it was the gruesome way in which the killings had happened. The most disturbing factor was another dark poetry tattooed on the dead driver’s chest! What everyone was yet to realize was the fact, that the twin murder case was just the beginning of a spine-chilling saga of unreasonable killings. The top cop in the city was assigned to the case. But before he could get a breakthrough. The city was jolted by another pair of killing.
The common factors between the two cases, the pregnancy of the dead woman, a loyal employee and another dark poem. Realizing that these killings weren’t just about just an impulsive reaction. But it was a well thought out vengeance to and hurting wound. Maybe the killer was trying to convey something through his poetry. Hence a criminal psychologist Rudra was onboarded into the investigation. Though eccentric in nature, there was no doubt in his genius! Though blindness was his disability, his analytical capabilities and much more. All put together made him sharp beyond words.
But the killer isn’t the only hurdle he has to overcome. There are many in his way, including the cop’s ego, his own pride and his baggage of the past. Why were pregnant women being killed? What were the dark poems all about? Will the challenges posed to him stop Rudra from cracking the case? To find out all of this and more read “FROM THE WOMB OF DARKNESS” The journey of writing this story was indeed life transforming.

Ashwin: I believe both good and evil are within us. Like bravery is born of fear, like wisdom is born of ignorance, and light is born of darkness. The story speaks of one such set of personas. Hence the name.

Ashwin: I grew up believing books are my best friends. the characters I read about in stories like Arabian nights, Mahabharath etc. inspired me to create such characters myself.

Ashwin: Writing for me is like meditation. I hope in 10 years I learn more about the art of storytelling. Establish myself as a distinguished author and screenwriter.

Ashwin: Extremely important because like any product books too are products. A product however good it is needs good marketing to reach its audience/readers/users.

Ashwin: Stories stir hope in people. they make us believe that there is always a happy ending. Hence believe in your stories and write in full faith. One must never write thinking of fame or money. Write for the love of the art.

Ashwin: I am a technologist at my day job.

Ashwin: I don’t believe in anything like the writer’s block. As blocks happen when you are afraid of expressing yourselves. So just have faith in your skill and write as the world is your writing pad.

Ashwin: I hope “From The Womb Of Darkness-Holding The Prophesy” is acted by Abhishek Bacchan and directed by Neeraj Pandey.

Ashwin: Yes, I am. It is a murder mystery with a backdrop of social stigma.

Ashwin: Believe in your story. If you don’t the world won’t.

Click here to order Ashwin’s Book – From the Womb of Darkness: Holding the Prophecy