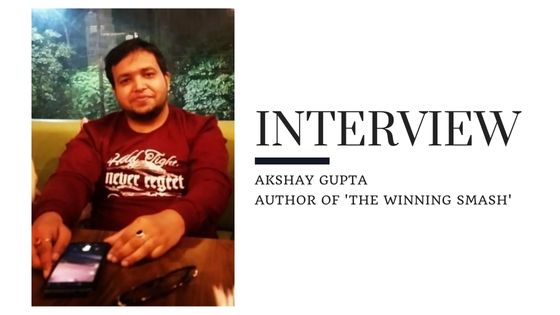 Akshay Gupta is a self-published author who writes fiction and poetry with equal ease and charm. Prior to beginning his career as a writer, Akshay completed his B.Tech in Mechanical Engineering and also worked as an assistant professor at a University for 3 years.

“Akshay ke Alfaaz” is his debut work. He was the second entrant for ” The Meraki Poetry writing contest.” Apart from this, Akshay Gupta was listed amongst the top fifty participants in ” The Hashtag Kalakar Contest.” Alongside his interest in literature, Akshay is a yoga enthusiast as well.

At 20, Akshay went through the most depressing phase of his life. He suffered from bipolar disorder, in spite of the unfavorable circumstances life threw at him, Akshay decided to keep fighting and not to lose his courage. Now he is on a mission to deliver a message to the world through his literary works, that if he can get success in his life even after facing a significant amount of time going through opposing and unfavorable conditions, then everyone can surely be successful in his life.

Akshay: My book have lots of emotions such as love, betrayal, determination and overcoming tough phase of life. This story is inspired by my closed one, I won’t reveal his name. Since childhood he has seen lot of difficulties in his life and he is still struggling with his life his only dream is that he wants to represent India in badminton. My intent was to write his story that people should know about him, and they get inspiration from his story. I want to represent him as a National hero for the young generation.

If I talk about my writing journey It was not a cakewalk. To write a book you need purpose, passion and discipline. Here I want to thank my mentor Sweta Samota India’s leading book coach who helped me throughout in my author journey, she encouraged me to finish my work. And I also want to mention here my cousins names, Shubhi Baranwal and Arizit Baranwal they were along with me in whole journey and due to their input I could make such a interesting story.
If I talk about the content of my book,This book deals with the part of life which describes fighting against the odd.A narrative is about enduring hardship, overcoming betrayal, and falling in love.

Dhruv had a difficult existence since he was a little child. After his birth, his mother preferred her relationship over him, and his alcoholic father irritates him. His only activity, badminton, gives him a sense of aliveness. He wants to compete nationally in badminton.

When his inebriated father sends him to live with his uncle, his entire world is turned upside down. When Dhruv is the target of a plot, the boy is exposed to drugs and addictive substances. He’s been betrayed so many times that his self-confidence is gone. But who is actually providing Dhruv drugs? He wants to end Dhruv’s life, but why? Would Dhruv achieve his goals or give in to his drug addiction?

Akshay: Since the theme of this book is badminton and Smash is a very popular stroke of badminton, that’s why I thought that this title will be best for my book. And the another reason of this title is concealed in this book, when readers will read this tale they’ll know the whole reason behind this title.

Akshay: Actually, I used to write hindi poetry for my own satisfaction. Than I started to write on “Your Quote” app, and I got appreciation by my friends and family. Than one day a publisher contacted me that we want to publish your book and I said ok, so by this way my writing journey has started. After that I felt that poetry became monotonous for me , I should try something different than I saw the Facebook ad of Sweta Samota than I felt lets try it, It would be fun, and due to her guidance I could publish my first novel.
If I talk about inspiration behind my author profession than it’s God. I truly believe that God has send us to help people, to inspire them by our thoughts and He gave me a responsibility to work for people on behalf of Him. That’s why Writing is very close to my soul. It’s a spritual work for me when I write I feel like I am serving to the God.

Akshay: Well, I don’t believe in making long terms goals because when you make long term goals than your consciousness stuck on the goals not on the process. And I’m a process oriented person, l love to live in present moment. But one thing is for sure , In future I am going to inspire million number of people.

Akshay: If you want to make successful your book than marketing is the most important part of it. I would say that writting is the 1% part only and 99% part is marketing. Yes, quality of book is also a necessary part because it’s the responsibility of creater that he give top notch experience to his readers. Because you can impress reader by marketing once but if you want to be successful in this field you can’t compromise with the quality of content. Content is the king.

Akshay: I want to give a very clear message to my readers that everyone is the part and parcel of the God. And it’s your responsibility to make Him proud by your action and your work, He shouldn’t feel that I have done some mistakes by making these kind of products. When you feel stuck in your life just believe in yourself and say one sentence to yourself that I’m God’s child and I never let him down.

Akshay: Well, by profession I’m a school teacher. I teach mathematics to my students. Apart from that I am a yoga enthusiasts too.

Akshay: When you feel stuck just return to your basic and ask yourself why this thing is important for me if your why is clear trust me you’ll become unstoppable. I do the same thing, I ask question myself why writting is important for me than I get answer that it’s service of God, than I say myself lets do it.

Akshay: I wish one day It happens. I think because it’s a sports fiction as a director I want to pick Neeraj pandey because he was the director of M.S. Dhoni The untold story and it was a masterpiece. And as a director I want to cast Vishal Jethwa who played the negative lead in Mardani 2. He is a marvellous actor and he would be perfect for Dhruv’s character.

Akshay: Yes I am working on my next book. It would be about God Shri krishna philosophy and I would convert it in a fiction tale so that readers learn about Shri Krishna’s philosophy without getting bored. I believe in infotainment that’s the great method to teach the folks something exciting.

Akshay: One thing I want to suggest that take imperfection actions. Leave the all kind of judgements, fear, self-doubt. If you have a thought It means God have chosen you to convert that thought into reality, if you’re not doing so you are insulting the God. So just trust in yourself and turn the thought into reality.

2 thoughts on “In Conversation with Akshay Gupta”