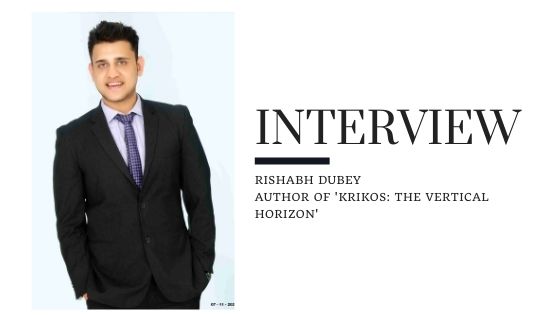 Born and raised in the mystic city of Lucknow, I am Rishabh, better know by my adopted title ‘Kridious’ (a namesake of the first fictional character I wrote). I wrote my first book at the age of 14 and have published 7 so far at the age of 24. I dwell in realms of both reality and fiction, diving into fantasy, politics, satire, humour, science fiction, poetry and more. Other than writing, I have a knack for music and am a songwriter and composer as well. Apart from the world of art and creativity, I double time as an IT professional with a corporate job.

Rishabh: Being an introvert in my early teens, most of my childhood was spent consuming diverse fictional universes in the form of text, video, audio, etcetera. I became fascinated with creating characters (borderline schizophrenic even) and began creating my first fictional Universe- Krikos, at the age of 14. By the time I was 18, I had published another book already, but Krikos had been consistently rejected by all publishers. It was not until I was 23 that Leadstart Publishing gave me an offer I couldn’t refuse. Krikos, today, is my biggest book so far. It has 5 sequels coming in, with talks of an OTT SciFi mini series as well. It was this book that got me inducted into the Indian Science Fiction Association and the Asian Science Fiction Association. The book, today, is also featured at the prestigious IASFS scifi museum in Bangalore. My pen-name ‘Kridious’ is also taken from the protagonist of Krikos.

Rishabh: Krikos, in ancient latin, means a ‘ring’. While writing this book I developed a new hybrid language called ‘Syrobnium’ with around 500 words. The language is a mix of Greek, Latin, Sanskrit and Mandarin. The idea of the future that I wanted to project was that ‘what goes around comes around’. Not just metaphorically but also practically. Krikos, in the book, is the name of the massive space station powered by the stars. It has celestial tyre-tube-shaped rings around it, within which humanity resides. The horizon for them, therefore, ironically rises upwards.

Rishabh: When I found serenity in letting the ink flow rather than being bothered by the fact that I was an ‘overthinking pariah’. The stories circulating within my head… Well I stopped holding on to them and started scribbling them down. Poetry came naturally to me as I started building my inner empathy.

Rishabh: Possibly within the storyline of a Utopian SciFi that’s written about the year 2031. Dystopian works as well if I am on the good side. The dark side works pretty fine too if and only if I get to work with the likes of Vader. Hahaha. Jokes apart, I plan the least and care the least about my future. For my motherland India, I wish to procure the first Nebula Award and the first Hugo Award. Whether I do it myself doesn’t matter to me. I spend my spare time in motivating creative hustlers to never stop hustling and to create marvellous works that get international recognition. For this, I have even started ‘The Voices of Silence’ project with my dear friend Vais for the sole purpose of promoting works by independent authors of India without any underlying costs. I don’t desire to be great. To quote from one of my books- ‘Greatness is a quality that can be bestowed upon the Great only by others’. Being good, well that’s within my control. I just seek to work hard enough to be good and rather better than yesterday. Rest all, I leave on judgement of the cosmos.

Rishabh: Being an MBA in Marketing, I have nothing but incessant respect for the domain. Selling is an art that’s isolated from any other. Along with writing a good book, you need to learn how to sell it as well. Although I think there is no end to learning this art, I have experienced a lot from my journey so far. And I am even writing a book about the art of selling a book (as paradoxical as it sounds). Hope that book sells… Or it would defeat its titular purpose. Hahahaha!

Rishabh: I want my readers to empathetically lose themselves within the universes I create. I want them to be exposed to the reality of fiction as well as the idiosyncrasies of facts. I don’t write to inspire. I only write to convey and present the world within my head to the world outside. Perhaps, after that, humans acknowledge more- the power our brain holds.

Rishabh: As I mentioned earlier, I am a musician and also have a corporate job. I love travelling and learning about places- especially the unexplored stories attached to the far and wide corners of the globe. I am a fitness enthusiast, so I when I am not pouring ink, I am pouring sweat.

Rishabh: It is a pretty common constraint that all writers face. I take to reading whatever I have written in iteration, so as to better advance the story. In fact, I always recommend that the best way to tackle writer’s block is to keep writing. Writing bad content that you later even discard or shelf won’t do you more harm than stopping to write altogether. Yes, taking a breather helps. But the show must go on.

Rishabh: There are talks about it right now for two of my books. Though writers get little to no say in the process of hiring actors/directors (sad reality) yet I would love it if Christopher Nolan gives a chance to my stories. As such, many of my science fiction stories play with time, something which the director is know to admire. When it comes to actors, being a movie buff I have an infinite list. So I won’t take any names.

Rishabh: I am currently working on five books- including sequels to Krikos, Mangoman and DEV, a book entitled The Big Earth and lastly The Religion Called Pragmatism. I wanted to project the plight of abandoned elders residing in Old Age Homes, as well as the collective concepts of all religions in India- the two subjects of the aforementioned last two respectively.

Rishabh: Only practice and repeating the entire process helps. No one is born a storyteller, writer or best-seller. You have to trust the uncertainty of the future and work the hardest in the present. Keep writing. You will keep improving. That’s the only advice I always give to anyone. There are no shortcuts or magic mantras. The only magic you can create is through doing it again and again. 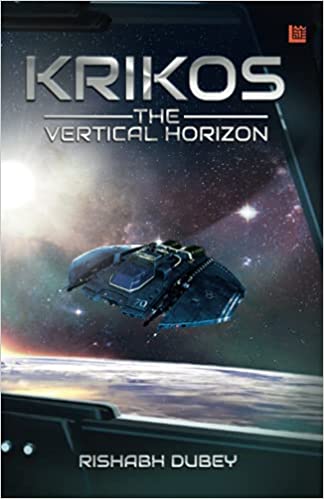