Meraj Hasan ‘meem’ is a Marketing & Communications professional, a poet and a music journalist. His first book of poems, ‘Khyaalon Ki Tapri’ became an instant bestseller in India and stayed on charts for a month after its release.
Meraj is also passionate about music. He collects vinyls and writes regular columns and features in www.musicunplugged.in. He lives in Dubai.

Meraj: One fine Sunday, about a decade ago, in the island country of Sri Lanka I wrote my first poem. Before that afternoon, I hadn’t written a single verse. I continued to write every now and then and started posting them on social media. The poems got appreciation from several quarters and friends & family started requesting me to compile my work in the form of a book so that they can have them at one place, in their library. That’s when the idea of ‘Khyaalon Ki Tapri’ was born. Little did I know that it would go on to become a bestseller.
‘Tapri’ is one of those little roadside stalls where India sips her tea, swaps stories and shares moments stolen from the bustling life. Just like the book’s collection of poems, sighs and memories. Written in Hindustani-that other rich brew of Hindi, Urdu and even English-stirred with longing, served occasionally in rhyme, the poems are an eclectic mix, echoing everything from Mumbai to the monsoons to the mundane. They are also about you and me and the ordinary. If you like observing and absorbing the nuances of life, you might find these words speaking to you.

Meraj: These poems are stray and ordinary everyday thoughts about an evening or rains in a city or a conversation. And Tapri is where ordinary people like you and me converge and talk about everyday things over cups of tea. So, the book is like a kiosk of thoughts – Khyaalon Ki Tapri. That’s how it shaped up in my head.

Meraj: As mentioned earlier, I started writing poetry because they started coming to me. It’s the people who became my readers on social media inspired me and almost coaxed me to collect those poems into a book. I never started off with the idea of turning into a writer / poet. It happened organically and I think that’s beautiful.

Meraj: Don’t know about the world of literature but hopefully I will have some more books out…and in different genres – poetry (of course), plays, essays etc. Someday, I would also like to make a movie. I have a few ideas there.

Meraj: Well, I don’t think there is a message in there. I write about the ordinary and every day. Things that I observe and feel or the pain that I have gone through or someone else has gone through. In this kind of writing, I don’t think there is any room for a message or that kind of thing. But the feedback that I receive from my readers is that the thoughts and ideas in the book are very relatable and somewhere the poems bring some kind of peace and calm to them…that’s something very heartening and satisfying.

Meraj: I am a Marketing & Communications professional and a music journalist.

Meraj: I rely a lot on taking a break and doing something completely different and unrelated. Watch a movie, listen to music, play the guitar, play with my son, exercise. I also rely a lot on ‘long walks’.

Meraj: Yes. I am working on my next book of poems. Its going to be out this year. Its a bilingual collection of couplets in Hindi & English. 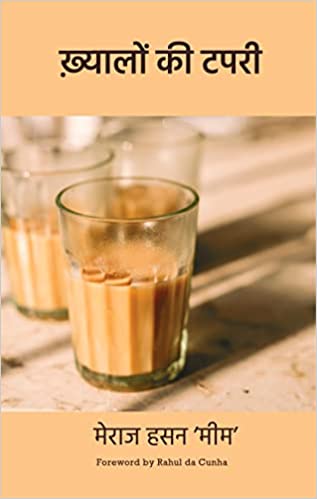 One thought on “In Conversation With Meraj Hasan ‘Meem’”